Since the introduction of the first utility wood – the “Baffler” – in 1975, or oversized heads in 1994, Cobra Golf has never stopped finding ways to help the average golfer play better and enjoy the game more.

Along with some important updates, the F8 family also comes equipped with the feature-laden Cobra Connect system. 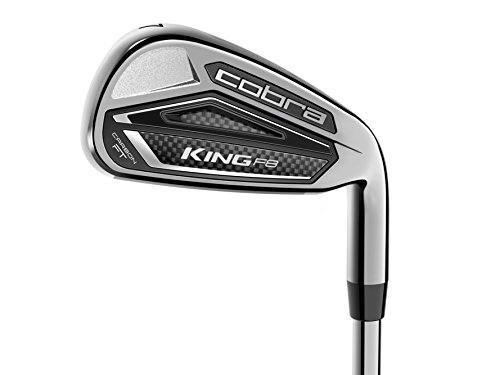 For these irons, a thinner face allows for increased face flex which leads to faster ball speed and in turn, more distance.

You are not buying these clubs to work the ball.  But you already probably know that.

Cobra actually created 3 different types of cavities for the F8 set of irons.

This allows for a good level of forgiveness throughout the bag.

GPS Distances – Thanks to advanced GPS, and a database of over forty-thousand courses worldwide, the Cobra Connect system provides players with their actual distances for each club.

Tour Analytics – Cobra Connect analyzes this data and helps a player determine their strengths and weaknesses. This knowledge, in turn, leads to more productive practice sessions.

Forged Pwrshell with E9 Tech – For flex and ball speed, Cobra employs their patented E9 technology which allows them to create a clubface that’s twenty percent thinner, and fourteen percent lighter than the typical iron.

Carbon Feel Technology – A multi-material carbon fiber badge that takes up most of the back of the club head serves to dampen vibration and provides a solid sound and feel.

Full Hollow Iron – The four through seven irons use a hollow construction with more weight focused on the sole of the club.

The Cavity Back Iron – The eight iron, to the pitching wedge, employs a cavity-back design which improves forgiveness and accuracy on approach shots.

Optimized CGs – A progressively increasing hosel length – from the four iron through the lob wedge – lowers the CG and improves launch and forgiveness in the long irons, and accuracy in the short irons.

Milled Grooves – CNC milling delivers exact and varying groove structures depending on the club. Long irons have somewhat “V” shaped grooves, while short irons and wedges use more of a “U” shape, with the wedges having about twice the number of grooves as both the long and short irons.

Along with the traditional F8s, Cobra King also makes a combo iron set. In the stock F8 combo set, a five hybrid replaces the five iron.

Players, with handicaps of five and up, should consider the King Cobra F8 Combo set with at least the five, if not the three and four hybrids, as well.

The King Cobra One Length Irons

This consistency of length and weight promotes uniform feel throughout the set. It also allows players to set up the same way for every shot.

This concept may or may not catch on but, it certainly deserves consideration from beginners and high handicappers.

One Length Irons also come in both standard and combo sets.

How do the King Cobra F8 Irons Compared to the F7 Irons?

The F8s and F7s have some features in common but, the F8s offer buyers some important updates as well. Both share PwrShell face technology, the variably sized cavity back, and CNC milled grooves (although Cobra engineers did update the groove patterns on the F8s).

The F7s also come in standard, combo, and one-length versions.

For the King Cobra F8s however, a more substantial carbon fiber badge, a thinner face, and smaller sleeker profile provide more distance, forgiveness, and better sound and feel than their predecessors, the F7s.

Then, of course, there’s the “upgrade of all upgrades,” the Cobra Connect system.

How do the King Cobra F8 Irons compare to other irons on the market?

For 2018, Callaway introduced their budget-friendly Rouge line which includes both the Rogue and Rogue Pro configurations.

TaylorMade threw everything but “the kitchen sink” into making the M4s the most forgiving irons out there.

One big separation factor for the F8 irons compared to these other models is price.

The F8 irons are very reasonably priced.  And because of this and the fact that they are very good all around clubs, we’ve named the F8 irons as our choice for the best budget game improvement irons.

For the full list, check out our top irons of 2018.  If you are an absolute beginner or high handicap, head over to our picks for the top super game improvement irons.

To make things complicated, buyers also need to consider the fact that many 2017 models are still on the shelves where you could save a few dollar if you are wiling to sacrifice the newest technology.

Here’s a chart of 2017 and 2018 model years, of six of the major manufacturers in no particular order, to help sort things out:

Which model of the Cobra King F8 irons works best for me?

Even some professionals these days have replaced their long irons with hybrids. Hybrids yield the same distance as their iron counterparts but, they do it with more loft and forgiveness.

Therefore, while the standard F8 irons will play better than what most people have in their bag at the moment, the F8 Combo set will offer the average golfer even more improvement.

Beginners might do well to give the One Length Irons a look.

Overall, the King Cobra F8 Irons play as long and forgiving as anybody out there thanks to their thin face, tailored cavities, and progressively increasing center-of-gravity.

While most club manufacturers make clubs with similar technologies and game improvement features, no one offers the – tech lover’s dream – Cobra Connect system.

The wealth of data, analysis, and just plain fun that Cobra Connect provides could be what makes the Cobra F8, and F8 combo irons, stand out in a field of some genuinely stand-out clubs. 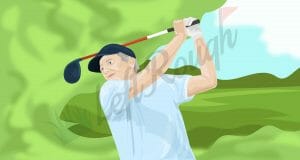 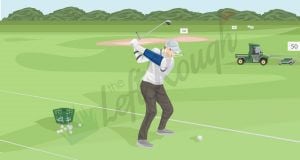