There’s a move in the golf swing that goes unnoticed or ignored a lot of times. It’s not complicated, but is incredibly important to a golfer’s success. The move I’m talking about is often called the “pivot.”

If you’re like me, just hearing that word either makes you think of Ross from the TV show “Friends” yelling “pivot” to his friends while carrying a couch up some stairs. Or maybe, you remember back to the days when you were learning basketball and a coach somewhere taught you not to move your pivot foot.

Either way, both of those situations have both nothing and everything to do with the golf swing pivot.

To be honest, there are a lot of sports that talk about a pivot, but they all have their own unique spin on the word.

In golf, the pivot is the move that creates power by turning and transferring weight from back to front.

You might not think about it much when hitting a golf ball, but it’s one of the main, and most important, moves.

What’s different about the golf pivot is that it seems like amateur golfers struggle to create it more than other sports.

What is the Pivot?

In short, the pivot is the rotating of your body and shifting of your weight from the beginning of the swing to the end. Get it right and it’ll almost guarantee solid impact and powerful distance, but get it wrong and you’ll probably hit your shot fat or thin.

In my experience, all amateur golfers think that they are doing the pivot, but many are just swinging their arms or sliding back to front. The pivot includes those two elements, but it also does much more.

The pivot is the rotation of the torso around the spine, the shifting of the weight onto the front foot, and the uncoiling of the body into a good finish position. I know, that’s all easier said than done.

How to Pivot Correctly

You’ve probably seen images of professional golfers at different points in their swing. Picture your favorite at the top of their swing. Their back is facing the target and it looks like their abdominal muscles twist around their body like pieces of string braided to create a rope. The hips turn in the same direction, but to a lesser degree. That’s the first move in the pivot.

Next, on the way down to impact, that same player begins to uncoil these muscles that were twisted around the spine. While doing that, their legs almost seem to bow forward as the weight begins to shift onto their front foot.

This move is the most subtle, starting at the top of the backswing and ending in the finish position. You start with half your body weight on each foot and finish with most of it on the front foot.

The final move is where the first two end in the finish position; chest, shoulders, and belly button all facing the target. In this moment, your back heel ought to rotate into the air, so that most of your weight is on the front foot.

All of these elements, put together, is called the pivot. It’s the initial turn back, followed by and uncoiling and shifting forward until you come to rest in a clean, balanced position, facing forward.

Why is the Pivot Important in your Golf Swing?

Why is this an important move though? You might’ve read that previous description and thought that it was a little overly complicated, or maybe you thought it was simple and obvious.

Either way, just know that it’s important and you shouldn’t assume that you’re doing it correctly. Many amateur golfers actually think that they are doing exactly what I talked about above, but they are not.

If you have difficultly creating power and hitting the ball as far as you think you should or maybe hitting the ball too fat or thin, you might struggle with the pivot without even knowing it. You see, the pivot is the crucial element of the golf swing that gives you power and consistency; two things we all want more of in our golf game.

You’ve probably noticed that some of the longest hitters in the world aren’t necessarily the biggest. Sure, there are some that are bulky or tall, but some are short and have an average build. Those guys hit the ball far because they make some of the best pivots in the world.

In order to make a good pivot, you have to know how to do it and have the flexibility. A simple way to improve your pivot skills is to regularly do some core stretching. If you do that, you’ll soon notice that it’s more natural to turn and shift through the golf ball.

Try this every day in the same location and you’ll slowly notice that you can turn farther than before.

Like I said, there are two main mistakes that amateur golfers make; too much arms and too much slide.

The first, too much arms, is when a golfer basically uses only their arms to swing the golf club. Of course, moving the arms is necessary to hit a golf ball, but if that’s the only big movement, then you’re in trouble.

To check if you’re using too much arms in your swing,

The second big mistake people make is that they slide too much from right to left (or left to right). You can figure out if you’re doing this by using the same video as mentioned above.

In this situation, if you’re sliding too much, you’ll see that your shoulders have shifted left or right, but remain the same width.

In both of these situations, amateur golfers make these mistakes because they are wanting to hit the ball farther. The belief is that your arms give you power or shifting your weight back and forth gives you power. While both of those are elements that will contribute to power, they will not, on their own, create a golf shot that travels far. You must also have a twisting of the torso and full pivot described in the previous sections.

Now, we’ve spent plenty of time talking about the pivot. In this section, I’ll give you some drills you can use to create a good pivot.

In this first drill, grab one of your clubs. It doesn’t have to be a 5-iron like I mentioned in the naming of this drill, but that’s normally my go-to club when I practice this.

Since you don’t actually have a club in your hands like normal, this will help you focus more on what it feels like to turn in your backswing.

Next, in order to get your weight shifted forward correctly:

Having the shaft of another club under your foot will force you to shift your weight off of it after the “impact” position. You’ll be able to tell you’re doing it correctly if you can easily get your foot completely off the shaft in the finish position.

Notice where the alignment rods point when you’ve finished your backswing. They both should have turned, but the shoulders ought to turn slightly more than the hips. Then, at the finish, both will be perpendicular to your target and parallel to one another.

There’s all you need to know about the pivot in your golf swing. If you want to get more consistent and hit the ball farther, work on this move to help create power.

Don’t forget to stretch your core muscles as well to help make this turn and shift possible. I’m sure if you practice these drills, you’ll see the pivot become a natural part of your golf swing. 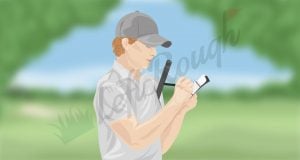 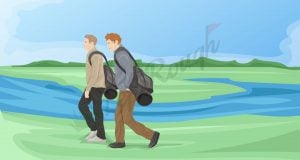 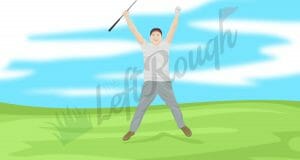 Mental Attitude in Golf: It Matters More than you Think 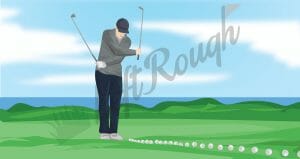 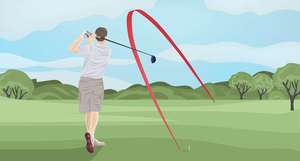