For many, the golf swing can feel like a complicated set of movements that need to be perfectly executed in order to hit a good shot. The good news is, it’s not as difficult as many people think.

At first, it can be a struggle. Some of the movements aren’t exactly normal, but with a little practice, they can feel natural. As with any skill, it takes time, but don’t get discouraged.

The proper golf swing sequence can be broken up into seven main sections;

These seven positions are all fairly simple, so it’s just learning how to put them all together that can take a little practice.

In this article, we’re going to look at the proper way to execute each position, so that you can perfect your golf swing.

The address position is the still, mostly motionless, stance right before a player begins their swing. It’s a critical point to get correct because if a player doesn’t start in the correct setup position, the odds of finishing in the correct position are severely diminished. Bad setup leads to issues later in the swing, one example of this is getting stuck in the downswing.

In general, this position ought to be marked by a straight spine and a bend at the waist.

Too often, amateur golfers will bend more at the knees, similar to an athletic position in other sports like basketball, golf is different though. The knees are slightly bent, but much of the body tilt comes from the waist.

Next, the arms are hanging, relatively loosely, straight down towards the ground and gripping the club. Again, often times people will try to extend their arms up or down, when the proper position is free hanging.

Finally, the feet ought to be about shoulder width apart with the ball resting somewhere near the middle of the stance, depending on which club is being hit.

The first half of the golf swing, what we’ll call the takeaway, is the time between address and when the hands and golf club are about waist high.

To start the swing, it’s important to remember to use your “big” muscles at first, instead of the “small” muscles.

It’s also important to rotate the club face slightly, so that the toe of the club points almost straight up when the hands are waist-high. This rotation allows the club to stay on plane and to naturally return to the ball in a square position.

Too often, amateur golfers try to keep the face pointing at the ball as long as possible, but that’s not possible and hurts your distance and direction.

3. Top of the Backswing

Once your hands reach waist-high, we’ll call the rest of the back swing the “top of the backswing.” This is the last part of your backswing sequence before your club and hands begin the downswing towards the ball.

There are a couple things you want to keep in mind for the top of the backswing.

First, this is where your wrists start to hinge a little more than they did in the initial takeaway. You’ll continue using your “big” muscles like your shoulders to turn your body and arms around your spine, but also start to incorporate the “small” muscles too creating a pivot motion.

As you begin to pick the club up into the air over your head, you want to make sure that the club finishes the backswing pointing at the target.

Too often, amateur golfers will finish their backswing with the club pointing either to the left or right of the target. This brings too much extra movement into the golf swing and can create a number of different errors.

Instead, you want the shaft of the club to stay in line with the target. This can be really difficult to notice on your own, so be sure to take a video or ask a trusted friend to check the top of your backswing.

Finally, your backswing ought to finish with the golf club parallel to the ground. Allowing the club to “cross the line” and go past parallel will also bring in too many moving parts that can make it difficult to hit a good shot.

All that being said, it is ok to stop a little short of parallel. Better to stop early at this point than go too far. Stopping early can help you maintain balance and timing.

A common mistake that amateurs make is taking the club too far because it feels like it’ll gain them more distance, but that’s not true. Stop at parallel and you’ll maintain balance, timing, and speed, which will all result in distance and accuracy.

The transition is the very end of the backswing when the golf club and body start moving in the opposite direction down towards the ball.

This can be a very critical point in the golf swing because a player needs to make sure that all their body parts are moving in unison. It’s for this reason that I recommend taking a fairly slow backswing. Most amateur golfers take a backswing that is entirely too fast. In their mind, more speed equals more distance. That’s true in some sense, but the speed is important in the downswing, not the backswing.

Your goal in the backswing is to get to the transition point while you are still balanced and time your transition, so that all of your body parts are moving together. Keeping your backswing fairly slow will help with all this.

Once your hands get to the top of the golf swing and the club is parallel to the ground, your swing will pause very slightly to begin the downswing.

After that pause, you want to begin your down swing with your lower body. Start to rotate your hips and torso back towards the golf ball. Your arms and golf club will tend to follow the lower body after that happens. It’s also at this point in the swing where the player will shift their weight back towards the lead foot.

Your hands will not follow the same path they took on the backswing. Instead, they will drop down and inside that path towards the ball. Allow gravity to take your hands and club a little bit as you start to move from a backswing to a downswing.

The downswing is the point where you are throwing your hands and club at the golf ball in order to make impact.

One thing to remember with the downswing is that you want to keep your back elbow (right elbow for a right-handed player) close to your rib cage. Too often, amateur golfers will allow that elbow to flare out, sometimes called a “chicken wing.”

That move will tend to create a large slice and can be difficult to control. So, remember to keep that elbow in tight to your side. It won’t be touching your ribs but keep it close.

Another important point to make in the downswing is to maintain your wrist hinge as long as possible.

Again, a lot of amateurs will release their wrist hinge almost immediately after the transition. This is referred to as “casting” because it looks a bit like casting a fishing pole. The problem with casting is that it loses all the built-up energy and tension in your wrists that can be converted to power. Maintaining that energy is referred to as the lag effect.

Finally, we’ll mention the role of the back foot in the golf swing. A lot of long drive champions and pro golfers will allow their back heel to come up in the air before impact. This can be really helpful in gaining some extra distance, but it can also make accuracy a little more challenging.

I’ll provide you the information and let you decide what is right for you:

After impact, the heel must come up though to hit a solid shot.

The impact position is the most important point of any golf swing for fairly obvious reasons.

It’s the only point where the club and the ball make contact, so it’s incredibly important that a golfer get this correct in order to hit a good shot.

There are three main impact positions.

The first is a traditional shot, like an iron out of the fairway. In this impact position, you want the club head to moving in a downward motion into the golf ball. The club ought to make contact with the ball first and then the ground after.

In this type of shot, you want to make impact with both the ball and the ground in that order. If one is missing, or the order is reversed, then the ball will not do what is intended.

You also want to make sure that the club approaches the ball slightly from the inside, because your swing is rotating around your spine.

Another impact position is the driver, or a ball off the tee. In this impact position, the club will also approach the ball slightly from the inside.

In a bunker shot, you want to make impact with the sand first and slide the club under the ball in order to make it fly in the air.

It’s the displacement of sand that moves the golf ball, not necessarily the impact of the club with the ball.

How early you hit the sand would depend on how much, or how deep, the sand is in the bunker. The more sand, the farther behind the ball you’ll make impact with the sand.

Finally, the follow-through and finish is the point in the golf swing that often works when everything else before it lines up.

In the follow-through, or the point after impact, you’ll want your body to follow the ball. So, you weight moves on to your front foot, your back heel is raised in the air (with toe on the ground), and your belt buckle and chest move towards the target. You’ll want to finish your shot in balance and aligned towards your intended target.

Another critical part of the follow-through and finish position is resting the arms on the front shoulder (left for a right-handed player). The club would point behind the player and the hands will come to rest, comfortably, either behind the head or on the shoulders.

There you have it! The proper golf swing sequence that will result in a perfect golf shot. Go get to work on each of these areas and you’ll be hitting long, straight shots in no time at all. Understanding the sequence is big part of having a fundamentally sound golf swing.

1 thought on “Putting it All Together: The Golf Swing Sequence” 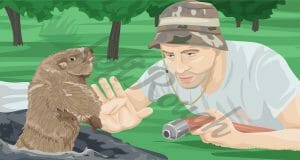 The Top 10 Best Golf Movies of All Time 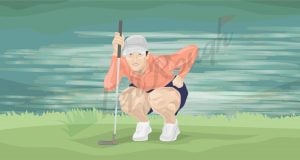 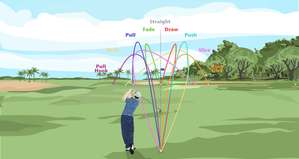 Will Hitting off Mats Hurt My Game? 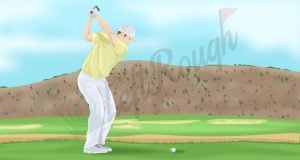 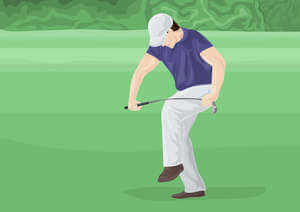 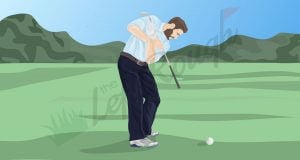 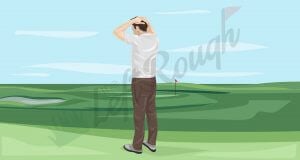