When it comes to the short game, it’s important to have a variety of shots in order to tackle any situation that comes your way.

Unfortunately, most amateur golfers hit the same pitch or chip shot over and over again, without getting too creative. This may work some of the time, but if you play enough golf, you’ll soon run into a shot that needs a different approach.

One of those shots that a lot of people don’t think about, or use enough, is the bump and run.

You’ve probably heard a television commentator use that phrase before, but many people don’t hit it.

By the name, you can probably guess what it looks like. That’s great, but if you don’t know how to hit it or why, then you’re missing an important skill. Or, maybe you’ve tried it before with some success, we’re going to go over everything you need to add or improve the bump and run shot in your shot arsenal.

There are several reasons you may want to hit a bump and run shot during a round.

The first reason would be when you find your ball in a tight lie, relatively close to the green. For those who don’t know, a tight lie is when there is very little grass under your golf ball. I’m not talking about in a greenside bunker, but instead, it might be an area that is burnt out or dead from lack of water. It also might be a hard dirt area.

Another tight lie could just be an area that is really hard, but the grass is also cut short. No matter the tight lie you find yourself in, the bump and run shot gives you more room for error than other shots, like the flop. Too often, amateur golfers try to hit a cool looking shot in a tight lie and it only results in a skull shot flying across the green.

Another reason you may want to pull out the bump and run is if you find yourself around the green, but also face an obstruction in the air, like a tree. One of the courses I used to play in my youth seemed to have a lot of trees around the greens. It was fairly common to miss a green and have tree branches hanging over my desired ball flight, so a bump and run would be necessary in order to keep the ball under the branches.

Similarly, you may want to hit a bump and run if it’s really windy. Wind can take a pitch shot and off line. If that’s the case, you may consider hitting a bump and run. This is a very common practice in European golf because of how the courses are designed and the weather conditions. Occasionally, you’ll also run into this situation in other areas of the world as well, so you need to know when the wind is forcing you to hit a bump and run shot.

A Lot Of Green To Work With

Finally, another time you may want to hit the bump and run is when you’re on the fringe or fairway, near the green, but with a lot of green to work with. Meaning, the pin is in a location where you don’t need the ball to spin and stop quickly. At most golf courses, the grass on the green is fairly predictable.

If you get the ball rolling on the green, you can pretty accurately guess where the ball will roll and trust that it’ll finish with a good lie.

Basically, a bump and run is going to provide you control over a shot in a couple different ways.

How To Hit A Bump And Run Shot

Now that you know why and when to hit a bump and run, we need to talk about how to actually hit this useful shot.

First, let’s talk about club selection. One of the biggest short-game mistakes that amateur golfers make is that they always grab the same club, a wedge of some sort, around the greens. This practice really limits you on what your able to do with the golf ball.

In the bump and run shot, you want to grab something with less loft, like a 7-iron. Some people even go up to a long-iron to hit the shot. There’s really no universally wrong answer to club selection. You just want to make sure that your club selection matches your desired ball flight. So, if you want it to travel farther or lower, a long-iron may be necessary.

When hitting a bump and run, you want to set up to the ball with a fairly narrow stance, similar to the putt. As you’ll see in this section, the bump and run and putt are similar in a lot of ways. You also want to make sure that your feet are square, like in a full-swing.

Next, we’ll address ball position. When setting up to the ball, make sure that the ball is slightly back in your stance. So, for a right-handed player, the ball should be closer to the right foot than the left.

This will allow you to hit down on the ball. As you probably know, hitting down on the ball actually produces backspin in most shots, but not this one. I’ll explain why in a bit.

The Bump and Run Swing

Finally, it’s time to talk about the swing. Like I said before, the bump and run is very similar to the putt. You’ve got your feet together and a less lofted club.

You also want to use a swing that closely resembles the putting stroke, rather than the full-swing or flop. In order to do this, imagine your arms are a pendulum. Your goal is to have them swing back and forth fairly naturally and relaxed.

You’ll use the length of your swing and the club selection to control the distance, not the speed or strength of the swing.

The other thing you’ll want to focus on is keeping your wrists still. Just like in the putting stroke, you won’t “break,” or bend, your wrists in the swing.

Drills To Practice The Bump And Run

Now that you know when, why, and how to hit the bump and run shot, it’s time to practice it before using it in a round.

As I said earlier, in the bump and run shot, you want to make sure your wrists stay fairly quiet and still.

Next, since the bump and run is largely about keeping the ball down, this drill will help control that.

After doing this drill a few times, you’ll have added a large number of different shots with the same swing.

There you have it! Everything you need to add the bump and run shot into your bag of shots.

Practicing this shot and knowing when to do it will dramatically improve your golf course creativity.

The next shot to add to your bag? Head over to my article on how to hit the flop shot. 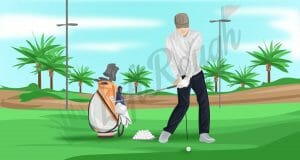 What is Early Extension in Golf? 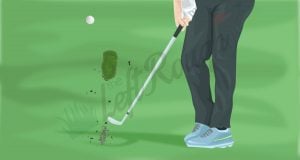 Everything You Ever Need to Know about Golf Divots 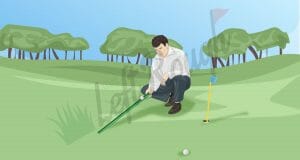 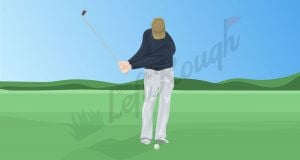 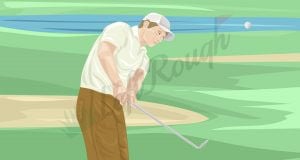 Saving Par: How to hit the Flop Shot 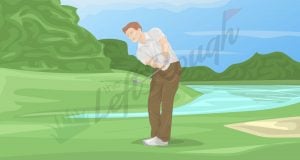 Advanced Short Game: How to Hit the Low Spinner Wedge